Links to the main UN organs dealing with people of African descent, to their activities and documents

UN organs in a nutshell 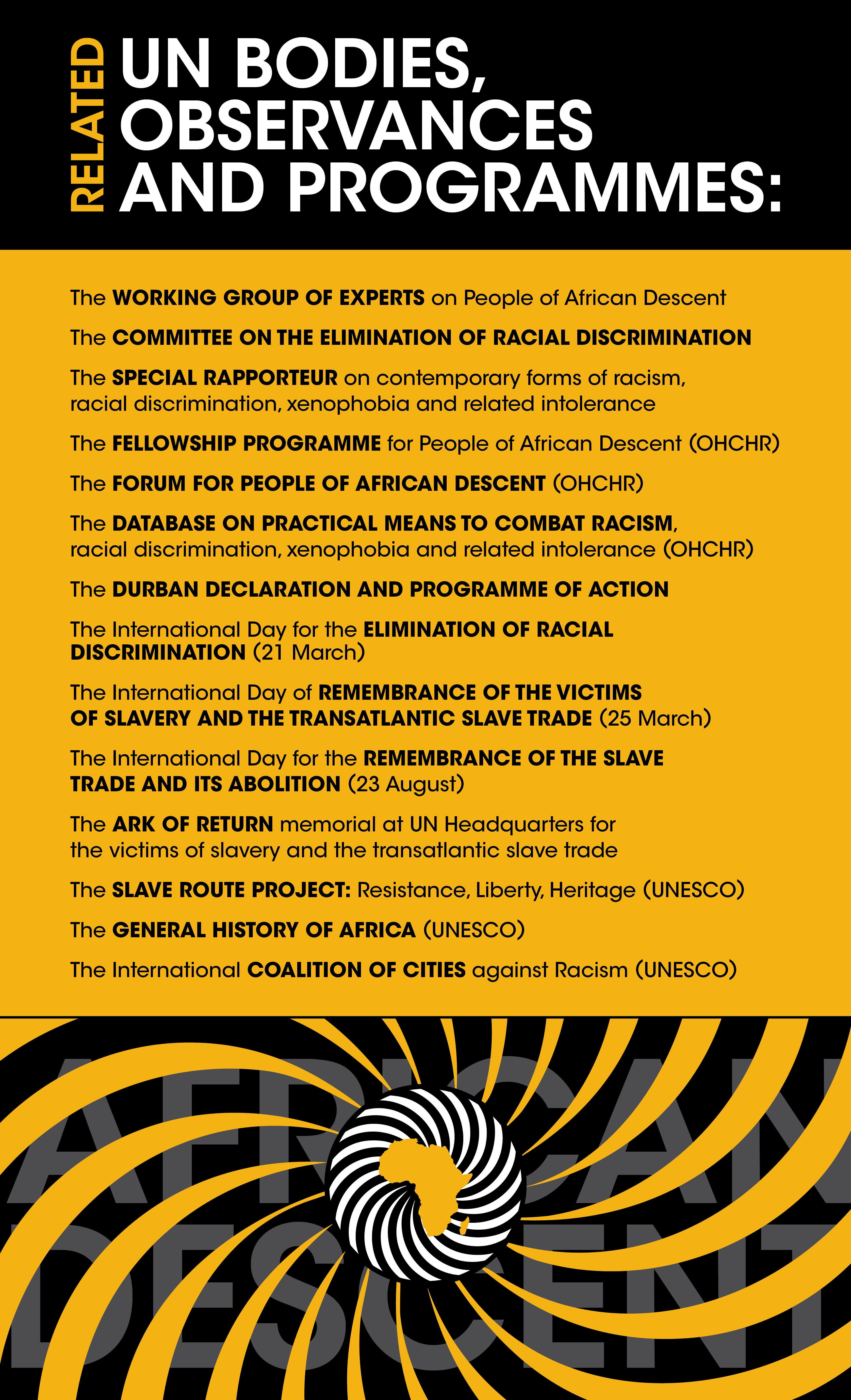 Working Group of Experts on People of African Descent

The Working Group of Experts on People of African Descent was first established by UN Commission of Human Rights resolution 2002/68 of 25 April 2002, in accordance with the request contained in paragraph 7 of the Durban Declaration and Programme of Action adopted by the World Conference against Racism, Racial Discrimination, Xenophobia and Related Intolerance in 2001.

The Working Group’s task is “to study the problems of racial discrimination faced by people of African descent living in the African Diaspora and make proposals for the elimination of racial discrimination against people of African descent". Its mandate has been reconfirmed and expanded by the UN Human Rights Council, the successor of the Commission of Human Rights (see also A/HRC/RES/27/25 of 26 Sept. 2014 for the latest extension of the Working group's mandate).

SESSIONS DEVOTED TO THE INTERNATIONAL DECADE

16th session of the Working Group (30 March-2 April 2015), PN, Room XXI - The session includes a thematic discussion of the topic "Development and people of African descent" - Programme of work - Agenda

Other topics under study the Working Group

Committee on the Elimination of Racial Discrimination (CERD)

The Committee on the Elimination of Racial Discrimination, composed of independent experts, monitors the implementation of the Convention on the Elimination of All Forms of Racial Discrimination by its State parties. All States parties are obliged to submit regular reports to the Committee on how the rights are being implemented. The Committee examines each report and addresses its concerns and recommendations to the State party in the form of “concluding observations”. The Committee meets in Geneva and normally holds two sessions per year consisting of three weeks each.

The Committee also publishes its interpretation of the content of human rights provisions, known as general recommendations (or general comments), on thematic issues and organizes thematic discussions.

General recommendation 31 (3 Oct 2005): Prevention of racial discrimination in the administration and functioning of the criminal justice system (A/60/18(SUPP), par. 460

The Special Rapporteur on contemporary forms of racism, racial discrimination, xenophobia and related intolerance is an independent human rights expert appointed by the United Nations Human Rights Council. The mandate of the Special Rapporteur is one of 56 special procedures of the Council and was created in 1993 by the United Nations Commission on Human Rights, predecessor to the Council.

By resolution 68/237 of 23 December 2013, the General Assembly requested the Intergovernmental Working Group on the Effective Implementation of the Durban Declaration and Programme of Action to develop a draft programme for the implementation of the International Decade for People of African Descent to be finalized and adopted during the sixty-eighth session of the General Assembly and not later than 30 June 2014

The Intergovernmental Working Group on the Effective Implementation of the Durban Declaration and Programme of Action held its 12th session from 7 to 17 April 2014 (followed by further consultations from 29 April to 2 May 2014 and on 8 and 9 May 2014).

By its resolution 26/1 of 18 June 2014, the Human Rights Council decided to urgently transmit to the General Assembly the report of the Intergovernmental Working Group on the Effective Implementation of the Durban Declaration and Programme of Action.

Ad Hoc Committee on the elaboration of complementary standards

Launched in 1994, the UNESCO Slave Trade Project has contributed to lift the veil and break the silence surrounding the historical slave trade and its consequences on people of African descent living in Africa, Europe, the Americas, the Caribbean, the Indian Ocean, Middle East and Asia. The Project highlights the cultural interactions that have resulted from this history, in view to build peace through cultural pluralism and intercultural dialogue and to encourage the construction of new identities and citizenships.

The Project has played a significant role in securing recognition by the United Nations, at the World Conference Against Racism, Racial Discrimination, Xenophobia and Related Intolerance, held in Durban in 2001, of the slave trade and slavery as crimes against humanity.

Under the guidance of its International Scientific Commmittee, the project continues to encourage new research in neglected regions; to define new approaches for the teaching of this history; to elaborate new guides for the identification, preservation and promotion of sites and itineraries of memory related to the slave trade and slavery; to promote the contributions of people of African descent to the construction of contemporary societies; and, to preserve written archives and intangible heritage related to this history.

General History of Africa :  the collection

Strengthening the fight against racism and discrimination: UNESCO’s achievements from the 2001 World Conference against Racism, Racial Discrimination, Xenophobia and Related Intolerance to the 2009 Durban Review Conference (2009) 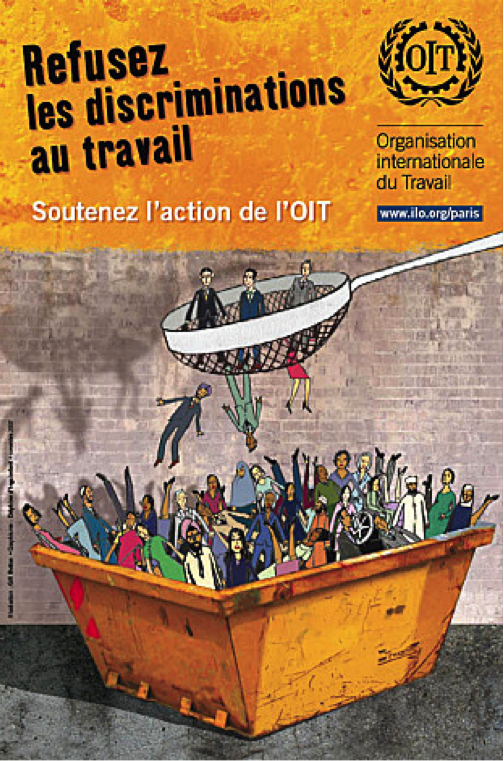 Decent work for all is one of the goals the International Labour Organization (ILO), the UN Specialized Agency devoted to promote social justice and internationally recognized labour standards. Issues linked to racial discrimination, as an obstacle to reach decent work conditions, are present throughout the ILO’s sphere of work. Some of  ILO’s legal instruments, in particular ILO Convention C.111 (Discrimination (Employment and Occupation) Convention) of 1958, and the ILO Declaration on Fundamental Principles and Rights at Work and its Follow-up of 1998 are fundamental international standards, often referred to by the Working Group of Experts on People of African descent.

However, recent ILO reports and studies seem to indicate that racial discrimination, in particular against people of African descent, continues to subsist and has even worsened with the beginning of the global economic crisis.

Equality at work: The continuing challenge - Global Report under the follow-up to the ILO Declaration on Fundamental Principles and Rights at Work (2011)

Multiple discrimination in the world of work : working paper by Prof. Colleen Sheppard (2011)