This section discusses some of the women and organizations which laid the foundation for women's involvement at the League of Nations and the United Nations. The page focuses on the women peace activists of the early twentieth century who warned against the consequences of the impending First World War, and later advocated for bodies like the League of Nations to do everything in their power to prevent another war of that scale. While some of these women were most active before the creation of the League, their influence was felt in the organization and records of these women now reside in the UNOG archives.

"The founding of the League of Nations in 1919 marked the beginning of organized and institutionalized inter-governmental collaboration in  a form that was unprecedented...Women immediately recognized the importance of such cooperation and had good reason to become interested in it as it aimed at ending wars and violence and the settlement of disputes through negotiations which corresponded with women's yearning for peace."--From The Unfinished Story of Women and the United Nations.

The 1915 International Congress of Women at the Hague laid the foundation for the Women's International League for Peace and Freedom (WILPF). From 1919 on, WILPF's values were internationally recognized and, according to the WILPF website, gave President Woodrow Wilson nine of his famous Fourteen Points. 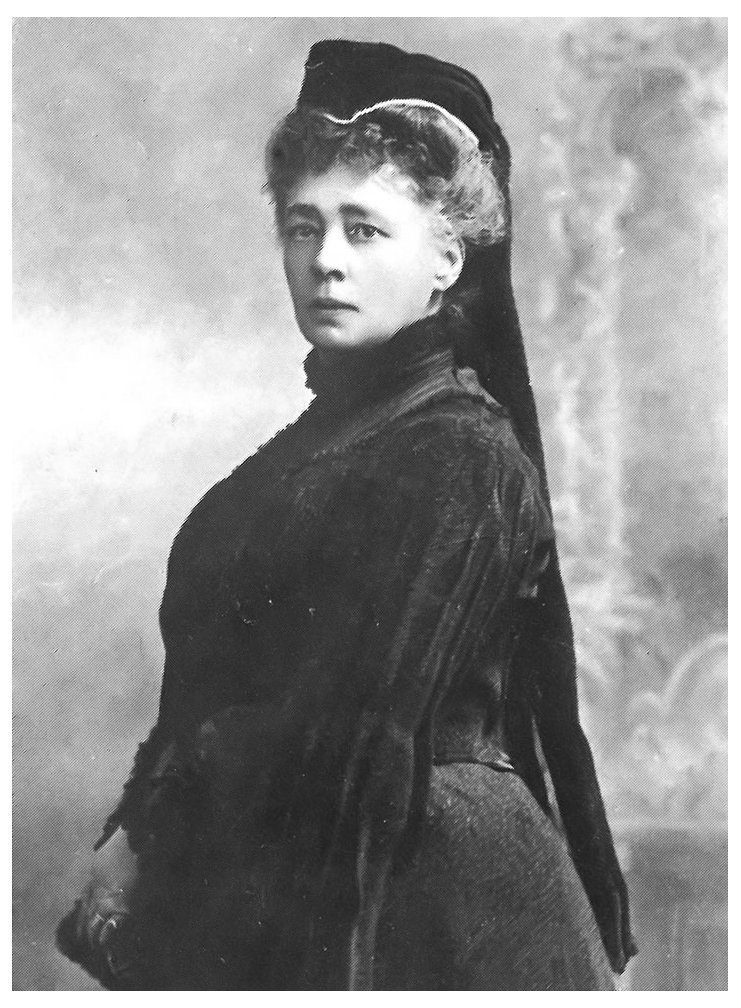 Although Bertha von Suttner died in 1914, before the outbreak of the First World War and the creation of the League of Nations, she was one of the most influential advocates for peace of her time. As a young woman, she was a co-worker of Alfred Nobel and, in 1905, she became the first woman to win the Nobel Peace Prize. Not only that, but Suttner was also among the first people Nobel discussed the creation of his prize with, as evidenced by this letter from the archives collection: 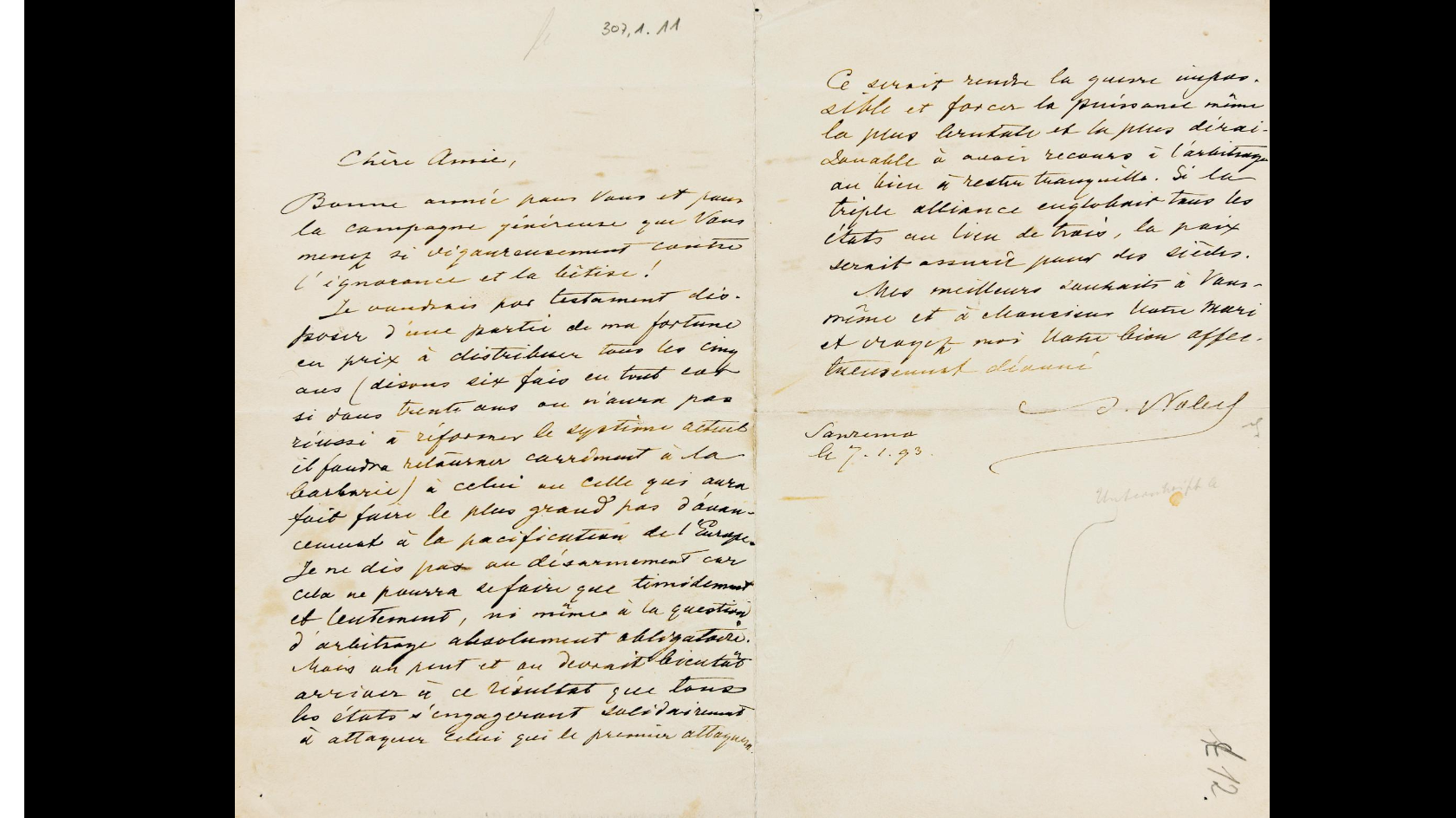 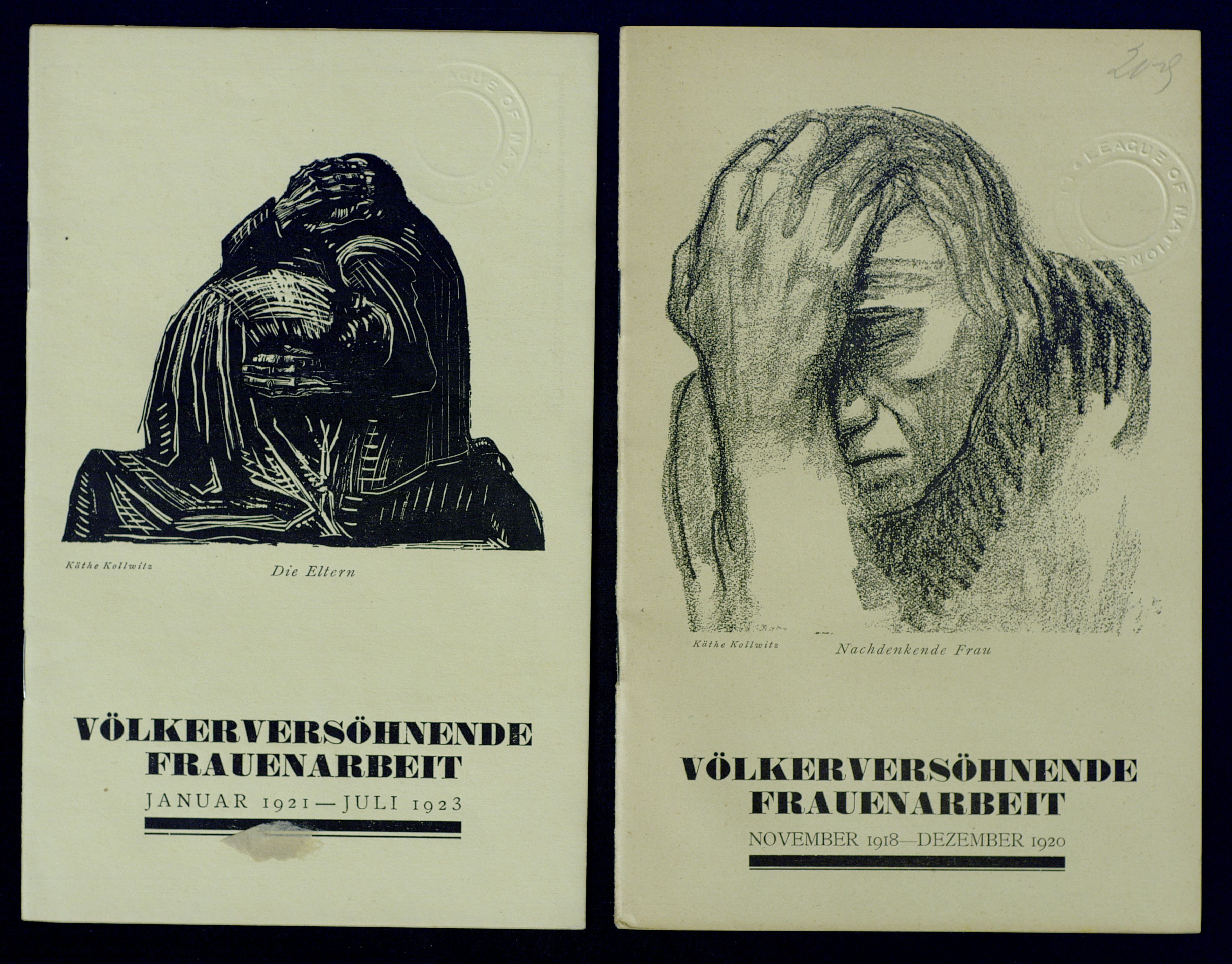 The Parents and Reflective Woman

Käthe Kollwitz was a German artist well-known for her anti-war lithographs. Some of her most famous works include Never Again War!, Bread!, and Mothers. Although she was a gifted printmaker and sculptor, Kollwitz is best known for the socially-charged content of her work. She was a woman in the art world at a time when the field was dominated by men and she made statements with her work at a time when it was unfashionable to do so. Thus, she was a figure who brought international attention to the very issues which motivated the creation of the League of Nations. 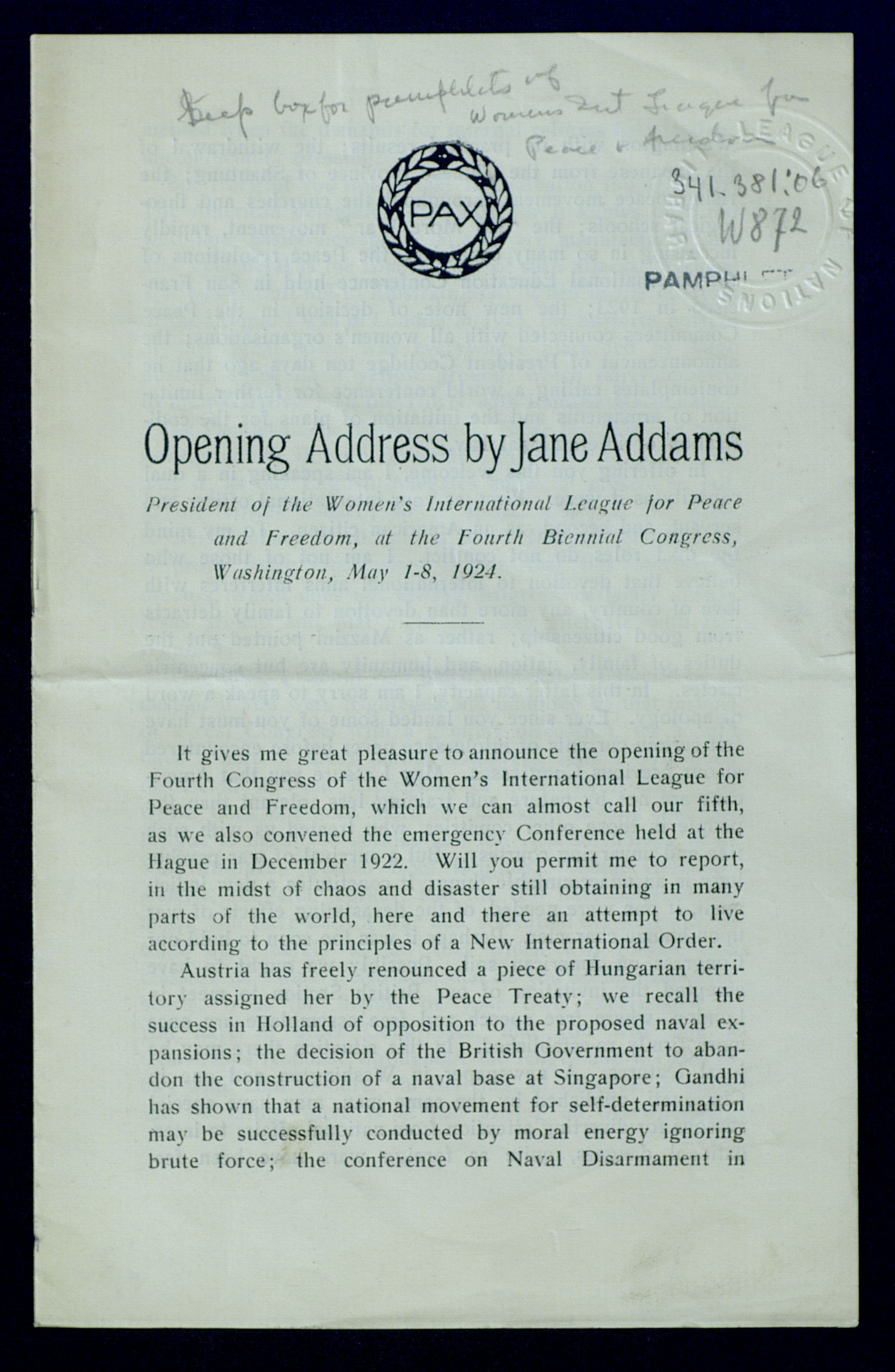 As president of the Women's International League for Peace and Freedom, Jane Addams gave the opening address to the group's fourth congress in 1924. Source: League of Nations Archives

In 1915, the International Congress of Women met at the Hague with Addams as its president. A few years later, Addams helped found the Women's International League for Peace and Freedom, which she presided over for the first decade of its existence.

In 1931, Addams became the second woman to win the Nobel Peace Prize. She hoped that "a peaceful arbitration of conflict would promote a more just an democratic order in the world and along with disarmament could avoid war and its consequences." Violet Oakley was an American artist who lived in Geneva from 1927-1930 and drew portraits of the men and women who participated in and visited the League of Nations. Inspired by William Penn--the Quaker leader and founder of Pennsylvania--Oakley devoted her life's work to spreading a message of peace. Oakley believed there was no better continuation of Penn's work and example of peace than the League of Nations. In La presence divine a la Sociétè de Nations Oakley wrote, "I believe there exists, spiritually, a great Suspension Bridge, 'made without hands, eternal in the heavens,' a Bridge connecting Philadelphia--Penn's City of Brotherly Love--and the City of Geneva." Through her time at the League of Nations, Oakley connected the peace-making mission of William Penn with that of the League of Nations.

Alva Myrdal was a Swedish-born author, diplomat, and activist. She co-authored with her husband Gunnar Myrdal, Crisis in the Population Question, a book about the social reforms needed to help people, especially women, achieve individual liberty. Her work with the United Nations began in her tenure as the chair of UNESCO's social science section from 1950-1955. She was the first woman to hold such a prominent position at the UN. In 1962 she was elected to the Swedish parliament, and later that same year served as the Swedish delegate to the UN Disarmament Conference in Geneva, a position which she retained until 1973. During this time, as the head of the non-aligned countries, Myrdal put pressure on the two superpowers of the Cold War to disarm. She was, however, disappointed with the USA and USSR for their lack of enthusiasm for disarmament. From 1967 to 1973, Myrdal was also the Swedish consultative cabinet minister for disarmament. In 1982, just four years before her death, Myrdal was awarded the Nobel Peace Prize for her work on disarmament.

The above video features Mary Wooley, the only female delegate to the United States, speaking about the 1932 World Disarmament Conference. Source: UN Multimedia

In the early days of the League of Nations, only Heads of State, foreign ministers and diplomats were entitled to participate in inter-governmental conferences. This, of course, excluded virtually all women. However, women demanded that they be given access to these meetings, as well as the right to access official documents and distribute their statements--literally, the right to lobby. They were first granted this right at the World Disarmament Conference in 1932. 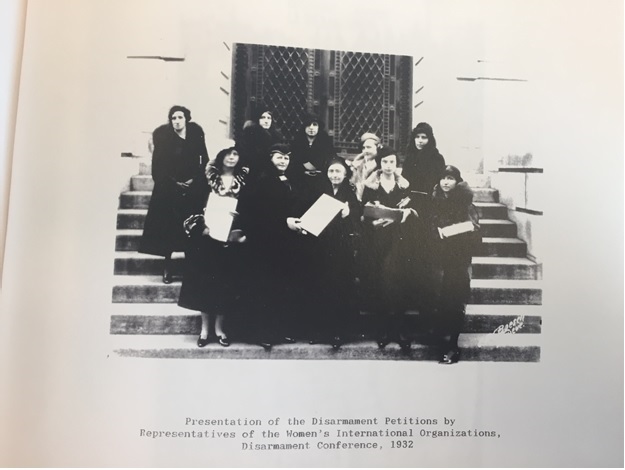 Source: The Unfinished Story of Women and the United Nations