This page features a brief timeline of women and women's rights at the United Nations. From the San Francisco conference where the Charter was written to the Sustainable Development Goals of today, women have played an instrumental part in fighting for their own rights and rights of others around the world.

"Women, as we all know, are realists--but they are also realists who while they keep their feet on the ground also keep their eyes on far horizons. Because they are realists the Commission [on the Status of Women] quite early realized the value of political rights."--1955 UN Review of "advances in the recognition, exercise and observation of Women's Rights."

Gender Parity was achieved in the top leadership of the United Nations. On January 15, Secretary General Antonio Guterres announced that for the first time in history, the Senior Management Group (effectively, the "cabinet" of the Secretary General) was comprised equally of men and women. While there has still yet to be a female secretary general at the United Nations, Guterres has shown his committment to achieving gender parity at senior levels, including by appointing Amina Mohammed as Deputy Secretary General. You can read more about the achievement of gender parity here.

Heads of state and governments adopted the 2030 Sustainable Development Goals in September of 2015. Two of the seventeen goals relate to the advancement of women. Goal 10 is to "reduce inequality within and among countries," while goal 5, "to achieve gender equality and empower all women and girls," is more specifically related to women's advancement.

The United Nations Entity for Gender Equality and the Empowerment of Women (UNWomen) is established in July of 2010. The organization works with countries from around the world to advance the rights of women and girls. UNWomen also supports inter-governmental bodies such as the Commission on the Status of Women in policy writing and the formulation of global standards and norms. When the General Assembly created UNWomen in 2010, it also merged and built upon the functions of four bodies within the UN which were dedicated to advancing women's rights. These were:

The Fourth World Conference on Women (FWCW) was held in Beijing from September 4-15, 1995. The convention welcomed a record 17,000 participants and 30,000 activists. It was at this convention that 189 countries unanimously adopted the "Beijing Declaration and Platform for Action" (PFA), a blueprint for women's empowerment. The PFA stands out as a document which no longer sought to simply eliminate discrimination against women, but which aimed to put women on equal footing with men in all political, economic, educational, civil, and other categories. 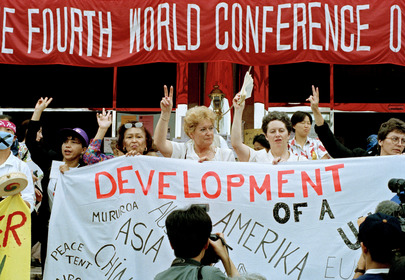 The UN General Assembly adopts the Convention on the Elimination of All Forms of Discrimination Against Women (CEDAW). This convention is commonly referred to as the "Women's Bill of Rights" and is considered the most comprehensive international instrument for women's rights. The document defines discrimination against women as "any distinction, exclusion, or restriction made on the basis of sex...in the political, economic, or social, cultural, civil or any other field."

The Committee on the Elimination of All Forms of Discrimination Against Women (also called CEDAW) was established by Article 17 of the convention. The committee consists of independent experts on women's rights from around the world who monitor the implementation of the convention. See our archives for more information.

CEDAW in the archives 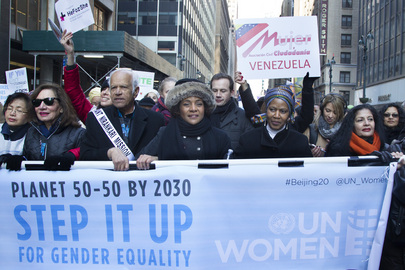 A group of people marches at the 2015 parade for International Women's Day in New York City.

Source: The Unfinished Story of Women and the United Nations

The United Nations Educational, Scientific, and Cultural Organization (UNESCO) adopts the Convention Against Discrimination in Education. This convention was the first to establish on an international scale that quality education should be available to all regardless of sex, religion, race, or nationality.

The Human Rights Commission completed the Universal Declaration of Human Rights. Eleanor Roosevelt acted as Chair of the Commission, and played a major role in the drafting of the declaration. The document was a historic achievement, as it was drafted from people of backgrounds and cultures from around the world. Not to mention that it was the first document to declare that all human beings are endowed with certain inalienable rights. The phrase "all human beings are created equal" rather than "all men" was included thanks to the efforts of Hansa Mehta (India). 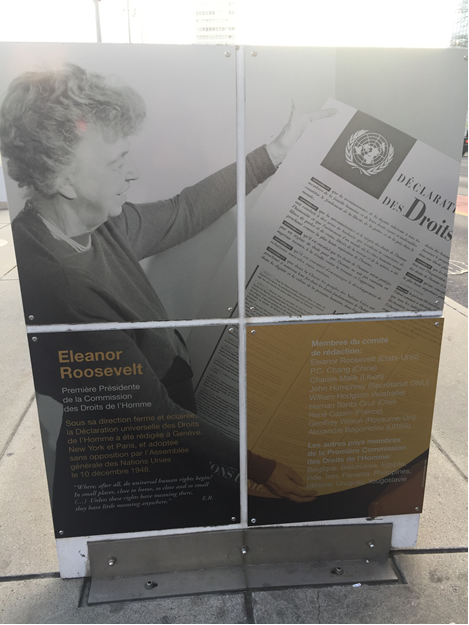 This photo of Eleanor Roosevelt holding up the UDHR in Spanish now stands outside the United Nations office in Geneva. 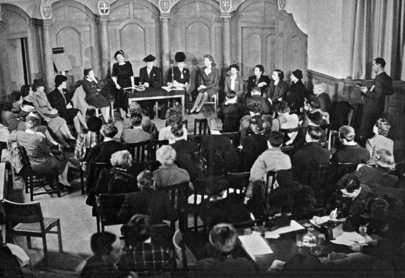 Council Resolution 11(II) established the Commission on the Status of Women. The CSW was originally established as a sub-commission, but soon gained independent status as a full commission under the Economic and Social Council. Still to this day, the CSW meets annually for a two-week conference on women's rights around the world.

Women such as Minerva Bernardino, Bertha Lutz, and Jessie Street went to the writing of the United Nations Charter in San Francisco to ensure women's equality was provided for. The women campaigned for the phrase "men and women" be included to refer to all people, rather than using "men" as a general term. In addition, these women are largely responsible for the inclusion of Article 8 in the Charter, which states, "The United Nations shall place no restrictions on the eligibility of men and women to participate in any capacity and under conditions of equality in its principal and subsidiary organs." 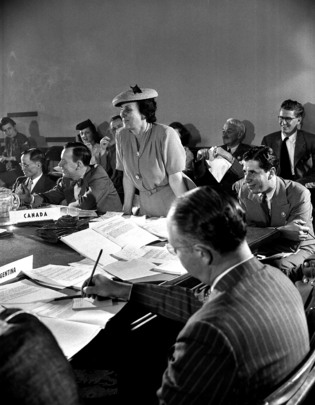 Bertha Lutz at the San Francisco Conference to write the Charter of the United Nations. UN Photo

To see how the fight for women's equality continues today, check out these useful links: