One of the primary purposes of the United Nations is the maintenance of international peace and security. Since its creation, the United Nations has often been called upon to prevent disputes from escalating into war, to persuade opposing parties to use the conference table rather than force of arms to settle disputes, or to help restore peace when armed conflict does break out. Over the decades, the UN has helped end numerous conflicts and foster reconciliation, including successful peackeeping missions.

While the Security Council is the primary organ for dealing with issues of international peace and security, the General Assembly and the Secretary-General also play major, complementary roles in fostering peace and security, along with other UN offices and bodies. United Nations activities cover the principal areas of conflict prevention, peacemaking, peacekeeping, enforcement and peacebuilding. 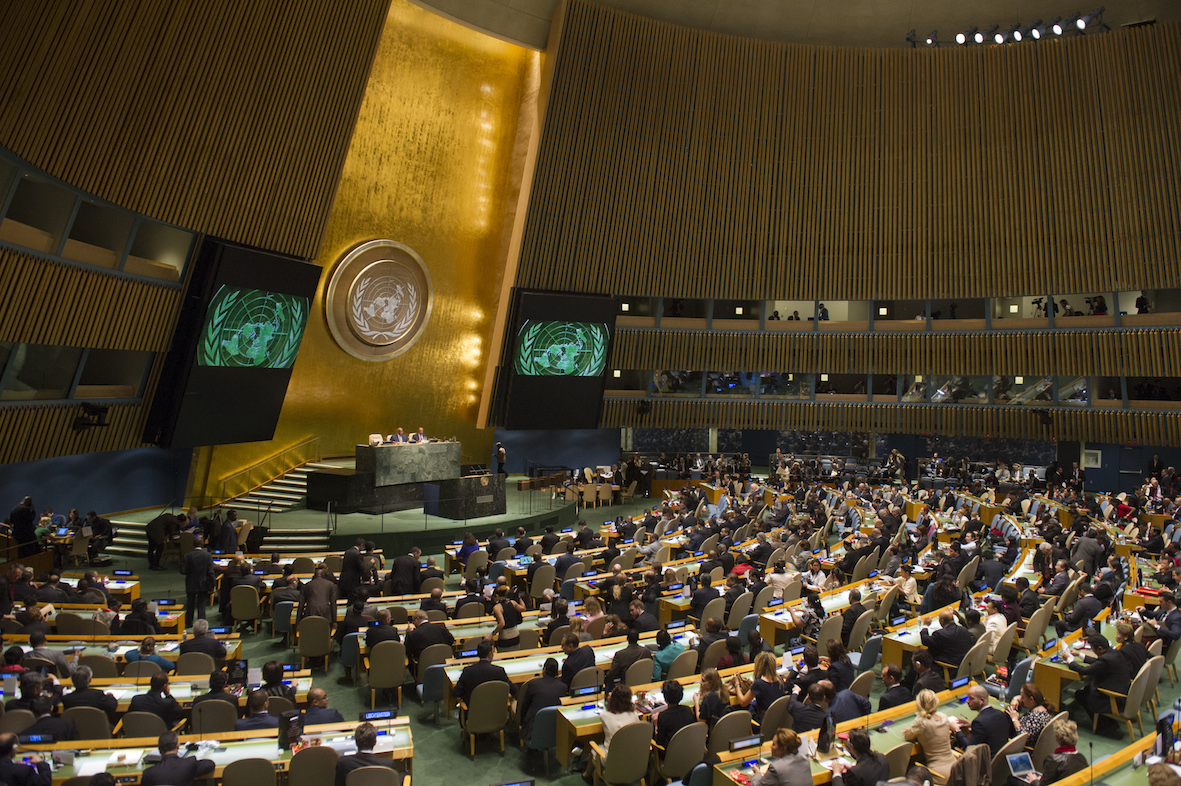 Article 11 of the Charter of the United Nations empowers the General Assembly to "consider the general principles of cooperation in the maintenance of international peace and security" and "make recommendations... to the Members or to the Security Council or to both". The Assembly offers a means of finding consensus on difficult issues, providing a forum for the airing of grievances and diplomatic exchanges. To foster the maintenance of peace, it has held special sessions or emergency special sessions on such issues as disarmament, the question of Palestine and the situation in Afghanistan. The General Assembly considers peace and security issues in its First Committee (Disarmament and International Security) and in its Fourth Committee (Special Committee and Decolonization).

Over the years, the Assembly has helped promote peaceful relations among nations by adopting declarations on peace, the peaceful settlement of disputes and international cooperation. 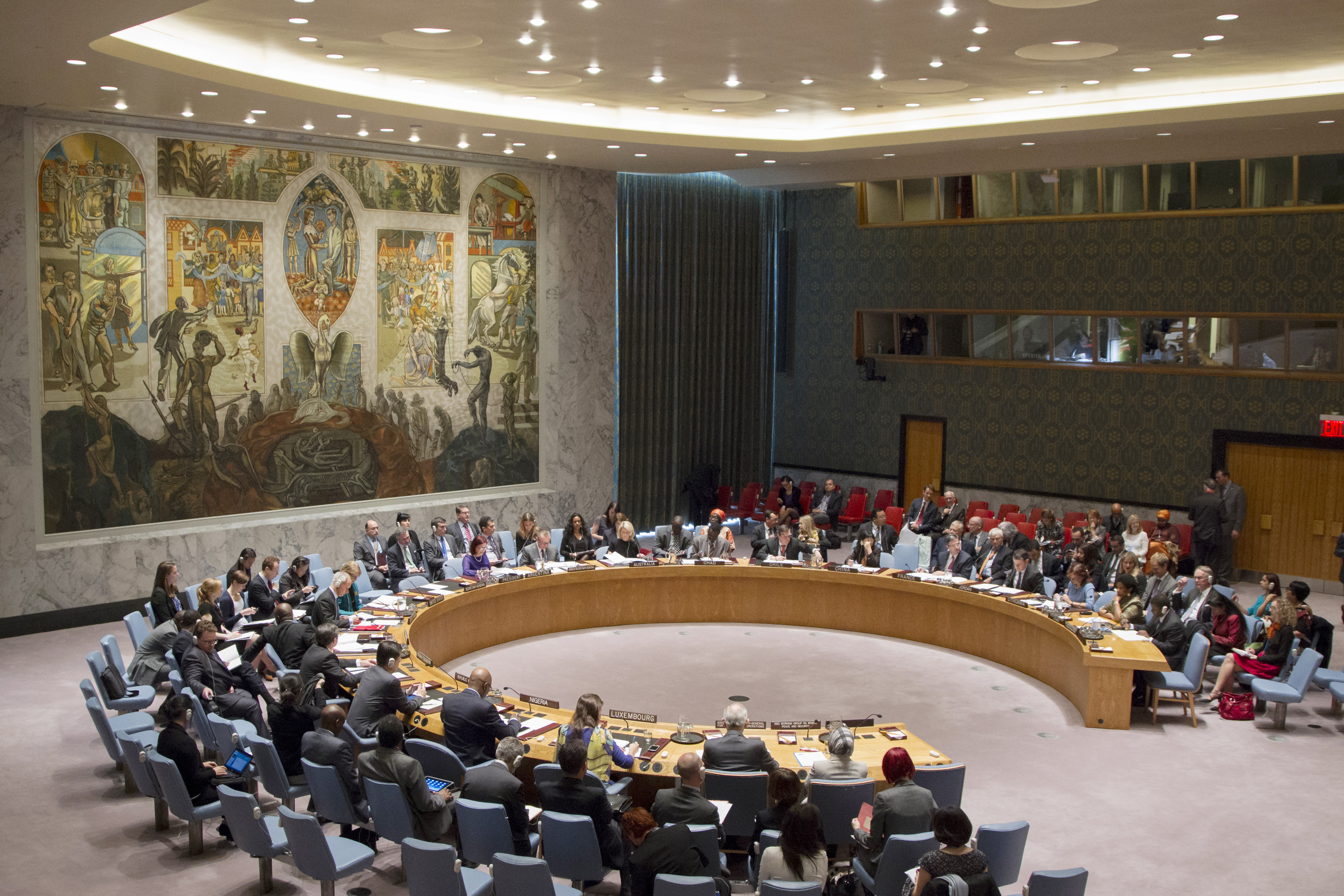 Under the Charter, the Security Council has primary responsibility for the maintenance of international peace and security. It has 15 Members, and each Member has one vote. Under the Charter, all Member States are obligated to comply with Council decisions.

The Security Council takes the lead in determining the existence of a threat to the peace or act of aggression. It calls upon the parties to a dispute to settle it by peaceful means and recommends methods of adjustment or terms of settlement. In some cases, the Security Council can resort to imposing sanctions or even authorize the use of force to maintain or restore international peace and security.

Under Chapter VII of the Charter, the Security Council can take enforcement measures to maintain or restore international peace and security. Such measures range from economic sanctions to international military action.

Peace enforcement is used to restore international peace and security in situations where the Security Council has decided to act in the face of a threat to the peace, breach of the peace or act of aggression. The Council may utilize, where appropriate, regional organizations and agencies for enforcement action under its authority and in accordance with the UN Charter.

The UN has played a variety of roles in electoral processes, ranging from technical assistance to the actual conducting of the process. In some cases, the UN coordinates the activities of international observers. Typically, such observers follow the registration of voters, the electoral campaign and the organization of the polls. The degree and type of involvement depends on such factors as the requests received from governments, provisions of peace agreements, or mandates from the General Assembly or the Security Council.

The Electoral Assistance Division in the Department of Political and Peacebuilding Affairs is the focal point for electoral affairs within the UN system.

The Office of the High Commissioner for Human Rights helps train election officials, establish guidelines for drafting electoral laws and procedures, and sets up information activities on human rights and elections. 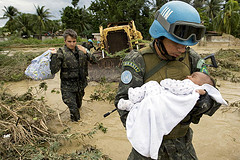 The Charter is the foundation document for all the UN work. The UN was established to “save succeeding generations from the scourge of war” and one of its main purposes is to maintain international peace and security.

Peacekeeping, although not explicitly provided for in the Charter, has evolved into one of the main tools used by the United Nations to achieve this purpose. The Charter gives the UN Security Council primary responsibility for the maintenance of international peace and security. In fulfilling this responsibility, the Council may adopt a range of measures, including the establishment of a UN peacekeeping operation.

UN Peacekeeping helps countries navigate the difficult path from conflict to peace. They have unique strengths, including legitimacy, burden sharing, and an ability to deploy troops and police from around the world, integrating them with civilian peacekeepers to address a range of mandates set by the UN Security Council and General Assembly.

For the United Nations, peacebuilding refers to assisting countries and regions in their transitions from war to peace. Peacebuilding aims to reduce the risk of lapsing or relapsing into conflict by strengthening national capacities at all levels for conflict management, and to lay the foundation for sustainable peace and development.

A peacebuilding process normally begins with the signing of a peace agreement by former warring parties and a UN role in facilitating its implementation. This may include a continued diplomatic role for the UN, to ensure that the difficulties are overcome through negotiation rather than a resort to arms. It may also include the deployment of peacekeepers; the repatriation and reintegration of refugees; the monitoring of elections; and the disarmament, demobilization and reintegration of combatants.

In the enabling resolutions establishing the Peacebuilding Commission, resolution 60/180  and resolution 1645 (2005) of 20 December 2005, the United Nations General Assembly and the Security Council mandated it:

The UN Secretary-General may exercise his or her “good offices” to facilitate the resolution of the conflict. Peacemakers may also be envoys, governments, groups of states, regional organizations or the United Nations. Peacemaking efforts may also be undertaken by unofficial and non-governmental groups, or by a prominent personality working independently.

Anchoring the UN's peacemaking efforts is the United Nations Department of Political and Peacebuilding Affairs, which plays a central role in United Nations efforts to prevent and resolve deadly conflict around the world.  DPPA monitors and assesses global political developments with an eye to detecting potential crises before they erupt and devising effective responses. The Department provides support to the Secretary-General and his envoys, as well as to UN political missions deployed around the world to help defuse crises or promote lasting solutions to conflict.

The Department also coordinates UN electoral assistance activities and provides staff support to the UN Security Council and two standing committees established by the General Assembly: on the rights of the Palestinian people and decolonization.

Preventive diplomacy refers to diplomatic action taken to prevent disputes from escalating into conflicts and to limit the spread of conflicts when they occur. While it is conducted in different forms and fora, both public and private, the most common expression of preventive diplomacy is found in the work of envoys dispatched to crisis areas to encourage dialogue, compromise and the peaceful resolution of tensions. Preventive diplomacy can also encompass the involvement of the Security Council, the Secretary-General and other actors to discourage the use of violence at critical moments.

The Secretary-General provides his "good offices" to parties in conflict both personally and through the diplomatic envoys he dispatches to areas of tension around the world. The Department of Political and Peacebuilding Affairs is the principal support structure for those efforts, providing conflict analysis, planning and support to the work of peace envoys and overseeing more than a dozen field-based political missions that serve as key platforms for preventive diplomacy.

The work of the United Nations in conflict prevention extends well beyond traditional preventive diplomacy to involve a broad constellation of United Nations entities operating across a wide range of relevant disciplines — poverty-eradication and development, human rights and the rule of law, elections and the building of democratic institutions, the control of small arms, to name just a few.

In a vast political reshaping of the world, more than 80 former colonies comprising some 750 million people have gained independence since the creation of the United Nations. At present, 17 Non-Self-Governing Territories (NSGTs) across the globe remain to be decolonized, home to nearly 2 million people. Thus, the process of decolonization is not complete. Finishing the job will require a continuing dialogue among the administering Powers, the Special Committee on Decolonization, and the peoples of the territories, in accordance with the relevant UN resolutions on decolonization.

Since the birth of the United Nations, the goals of multilateral disarmament and arms limitation have been central to its efforts to maintain international peace and security. The UN has given highest priority to reducing and eventually eliminating nuclear weapons, destroying chemical weapons and strengthening the prohibition of biological weapons - all of which pose the most dire threats to humankind.

The Charter gives the General Assembly chief responsibilty for considering "the general principles of cooperation in the maintenance of peace and security, including the principles governing disarmament and the regulation of disarmament" (Article 11).  The Assembly has two subsidiary bodies dealing with disarmament issues: the First Committee and the Disarmament Commission.

The Conference on Disarmament is the international community's sole multilateral negotiating forum for disarmament agreements.

The UN Office for Disarmament Affairs (UNODA) implements decisions of the Assembly on disarmament matters.

The Advisory Board on Disarmament Matters advises the Secretary-General on matters relating to arms limitation and disarmament, and serves as the Board of Trustees of UNIDIR.

Learn more about disarmament issues in the following research guides:

One of the most significant achievements of the United Nations is the creation of a comprehensive body of human rights law - a universal and internationally protected code to which all nations can subscribe and all people aspire. The United Nations has defined a broad range of internationally accepted rights, including civil, cultural, economic, political and social rights. It has also established mechanisms to promote and protect these rights and assist states in carrying out their responsibilities.

The foundations of this body of law are the Charter of the United Nations and the Universal Declaration of Human Rights, adopted by the General Assembly in 1945 and 1948, respectively. Since then, the United Nations has gradually expanded human rights law to encompass specific standards for women, children, persons with disabilities, minorities and other vulnerable groups, who now possess rights that protect them from discrimination that had long been common in many societies.

In accordance with the World Summit Outcome Document, development, peace and security and human rights are interlinked and mutually reinforcing.

Other Areas of Action