The League of Nations first High Commissioner for Refugees was a dedicated scientist, an audacious adventurer, and an indefatigable savior of human beings displaced by conflict. 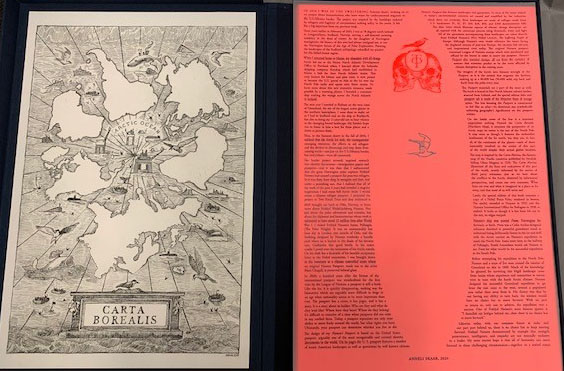 In the context of the 2020 UNHCR Nansen Refugee Award ceremony, the Permanent Mission of Norway has taken the initiative to donate a book, an artwork, dedicated to Fridtjof Nansen to the UN Library & Archives Geneva.

“Nansen’s Pastport”, is an artistic re-invention of Fridtjof Nansen’s refugee passport for post-Great War Europe. The book, designed and conceived by artist Anneli Skaar is re-imagined as a climate refugee passport for humanity, using Nansen’s own words in a contemporary context, inviting consideration on how to meet the pressing issues of current and future climate migration with wisdom from the past.

Ambassador Ms. Tine Mørch Smith, Permanent Representative of Norway, has donated a deluxe copy of “Nansen’s Pastport” to Francesco Pisano, Director of the UN Library & Archives Geneva, in a ceremony hold on 1 October 2020. The copy has been incorporated into the United Nations Museum Geneva collection.

Fridtjof Nansen, High Commissioner for Refugees of the League of Nations (1921-1930)
The Norwegian scientist, Arctic explorer and politician F. Nansen (1861-1930) started his humanitarian work at the end of the World War I. At first Nansen worked independently but in the spring of 1920 he was appointed as a League of Nations High Commissioner for Prisoners of War. As a result of his work, some 450,000 ex-prisoners of war from twenty-six countries returned to their homes. In August 1921 the Council of the League appointed F. Nansen as the High Commissioner for Russian Refugees. Furthermore, Nansen played an instrumental role in organizing emergency relief to famine victims in Russia in 1921-1923 and in 1922 he occupied himself with the problem of refugees from Asia Minor.

In addition to a small staff in Geneva, Nansen appointed delegates in refugee-hosting countries in order to keep in touch with governmental officials, private voluntary organisations, and the refugees themselves. By 1923 Nansen deleted the word ‘Russian’ from his title and was now called High Commissioner for Refugees, for in the meantime the problem of Greek and Armenian refugees had arisen. As, with the time the general issue of refugees became more linked to the problem of their employment, administrative and financial support of the High Commissioner’s Office on January 1, 1925 was transferred to the Refugee Section of the International Labour Office (ILO). The High Commissioner’s Office now occupied itself not only with Russian, Greek, Armenian, but also with Turkish, Assyrian, and other refugees, and remained within the administration of the ILO until 1929. On January 1, 1930 the High Commissioner’s Office returned to the Secretariat of the League of Nations. When in April 1931 it was reorganized into an autonomous Nansen Office for Refugees under the jurisdiction of the League, the High Commissioner Nansen was already dead.

Refugee work under the authority of the League of Nations (United Nations) after Nansen (1931-1952)
Nansen Office for Refugees continued its work with Russian and Near Eastern refugees. From 1935 until its official closure end of 1938, it also occupied itself with refugees from the Saar, but not with those from Germany proper. Therefore, in order to deal with the problem of refugees (Jewish and otherwise) who had escaped from the national-socialist regime in Germany, another autonomous office under the patronage of the League was established in London in 1933. In 1936 this office was integrated with the League of Nations administrative system, keeping its High Commissioner for German refugees, whose competence also extended upon new refugees from Austria and Czechoslovakia (Sudetenland).

After its liquidation in 1938, along with the liquidation in the same year of the aforementioned Nansen Office, new administrative bodies for refugee work were created. General assistance towards the refugees (Russian, Armenian, from the Saar and Nazi Germany) and co-ordination of activities exercised on their behalf were placed under the direction of the High Commissariat for Refugees under the Protection of the League of Nations, re-established in London in September 1938. In 1939, according to the decisions of the Evian Intergovernmental conference, an exterior to the League Inter-Governmental Committee for Refugees (IGCR) was created in London, again with the responsibility for refugees from Germany and Austria.

Despite the fact that the refugee work that had started with the Nansen High Commissioner’s Office for Refugees (along with the development of the Nansen fonds) came to an end with the end of the Nansen Office, the work did continue through the medium of subsequent institutions. The Inter-Governmental Committee worked until 1947 when it ceased to exist and was replaced by the International Refugee Organization (IRO), an institution under the authority of the United Nations based in Geneva. This Organization has also inherited the functions of the United Nations Relief and Rehabilitation Administration (1943-1947), which never had any official ties with the League of Nations but provided help for prisoners of war and displaced persons during the Second World War. The International Refugee Organization (1947-1952), finally, gave way to the still existing United Nations High Commissioner for Refugees, which was set up in 1951.

The Refugees Mixed Archival Group or the Nansen Collection is a complex archive group, hybrid in nature. It includes files from the Secretariat of the League of Nations, from the International Labour Office and from more or less autonomous bodies, and also small archive groups of external origin. Furthermore, the various archive groups are sometimes inextricably interlocked.

1920-1924
Initially, as the problems of the prisoners of war and refugees came into being, the Secretary General's Office as well as the Economic and Political Sections of the League of Nations opened and maintained the corresponding files.

After the appointment of Fridtjof Nansen as the League of Nations High Commissioner for Prisoners of War in 1920 and successively as the High Commissioner for Russian Refugees in 1921, the League took his personnel, expenses, and documentation under its authority. Also, a Refugee Section was created within the Secretariat, which included both Nansen collaborators and functionaries of the League. This Section became the actual Secretariat of the High Commissioner, which then maintained the files, initially opened by the Central Registry, Records and Mailing Section (the Registry) of the League. These files were arranged and kept according to the following sections of the Registry's classification system: "Prisoners of War", "Russian Refugees", "Famine in Russia", and "Refugees from Asia Minor".

1925-1929
When the High Commissioner’s Office was transferred to the International Labour Office (ILO), the Refugee Section followed, including its head and its files. These files constituted, on the one hand, its ‘Section files’, that is, those opened and registered solely within the Refugee Section, and, on the other hand, files of the Registry on prisoners of war, refugees, famine in Russia. In addition, with the appointment by Nansen of various representatives and offices of the High Commissioner abroad, these institutions started to open and assemble their own archives.

1930- April 1931
When the Office of the High Commissioner was transferred from the ILO back to the League of Nations at the end of 1929, its archives were transferred too. These archives now included both the "new" files of the ILO period as well as the "old" League files. As a result of the transfer, a Refugee Section was reconstituted at the Secretariat of the League, which functioned a little more than a year. This Section, along with keeping the archives which came from the ILO, produced a certain number of files, classified through the Registry's administrative section number 20 as well as its own "Section files."

April 1931-1938
In April 1931 the Refugee Section was transferred to the newly established autonomous Nansen Office for Refugees. It brought with it the majority of its files, except for some files (Registry's section number 20), which were left at the Secretariat of the League because of their relevance to its competency. Following such a re-organization, the Nansen Office continued to use and maintain those files "20" as well as opened new ones. At the same time the Secretariat of the League also maintained its files "20" and opened new ones classified through the Registry. In order to avoid confusion in the file numbers of the Nansen Office and of the Secretariat, the files which were opened at the Nansen Office from April 1931 onwards were given a serial number starting with 80 000. In their turn, files of the Secretariat (Registry files) were always registered according to the old system and thus, their numbers were not as high.

With the introduction of a new chronological classification system of the Registry in 1933, new file numbers were introduced for newly opened files "20" of the Secretariat. The system of classification of the Nansen Office, on the contrary, was left unchanged and, 80 000 and higher, serial numbers were still in use for the period from 1933 to the end of the 1930s.

As for the missions, offices or correspondents of the High Commissioner for Refugees and later Nansen Office in various countries, during the whole period of 1921-1938 those continued their work in their own way, little affected by the administrative changes of their central organisation(s). Therefore, their archives to a great extent have reflected their own administrative history.

Post 1938
After the official closure of the Nansen Office at the end of 1938, its archives stayed in Geneva and joined those of the Secretariat of the League. In 1947 these were supplemented by the archives of the Liquidator of the Nansen Office which came from Paris. The archives of the High Commissioner for German refugees, which operated between 1933 and 1938, were in 1936 also transferred from London to Geneva. The main part of the archives of theHigh Commissariat for Refugees under the Protection of the League of Nations (1938-1946) and of the League Inter-Governmental Committee for Refugees (1939-1947) after their closure were allocated to the International Refugee Organisation (IRO) based in Geneva (1947-1952).