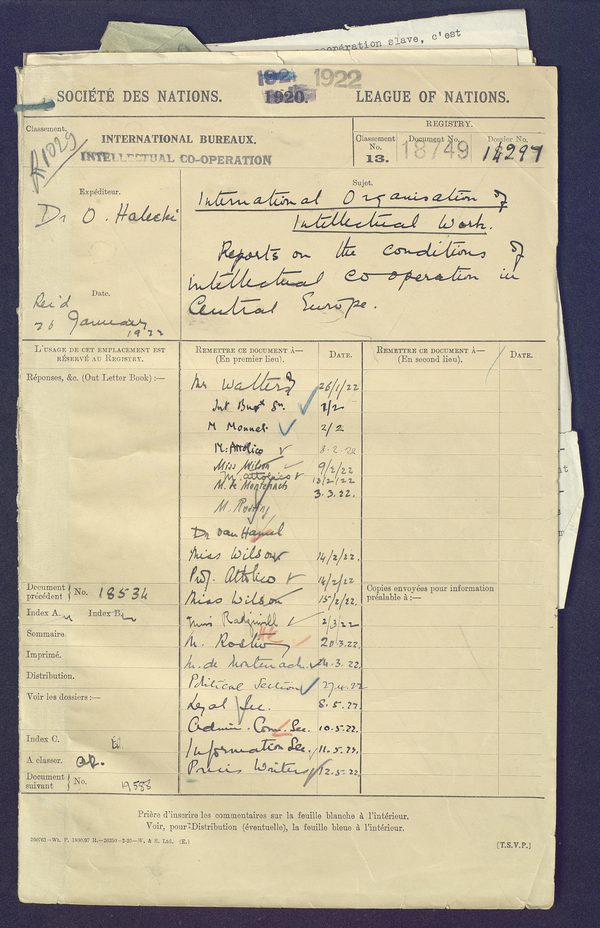 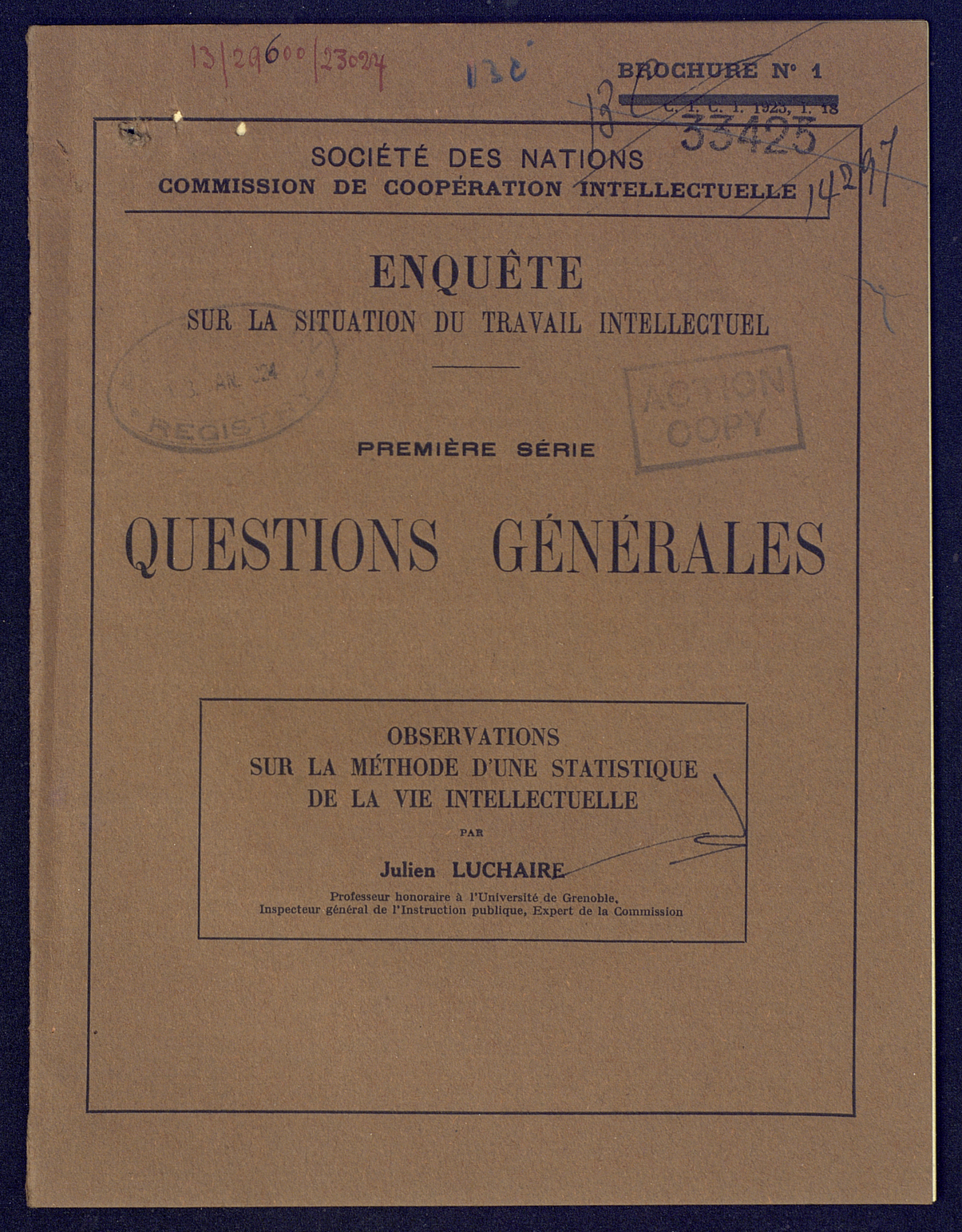 Opinion of the Contemporaries

Remarkably, during the writing of the Covenant of the League of Nations, when the organization was formed during the Paris Peace Conference of 1919, no attention was paid to intellectual activities. According to the Covenant, the promotion of international peace and security was a political, economic, and legal affair, not an intellectual one. Nevertheless, some delegates thought that the League could never succeed in its aims if intellectual work did not receive the same kind of attention enjoyed by manual labor.

Following this new awareness on the subject, the 5th Committee released a report arguing for "the nomination by the Council of a Committee to examine international questions regarding intellectual co-operation, this Committee to consist of not more than 12 members and to contain both men and women". As a consequence, in 1921, the Assembly of the League of Nations passed a resolution which established the foundation of  the International Committee on Intellectual Cooperation (ICIC). 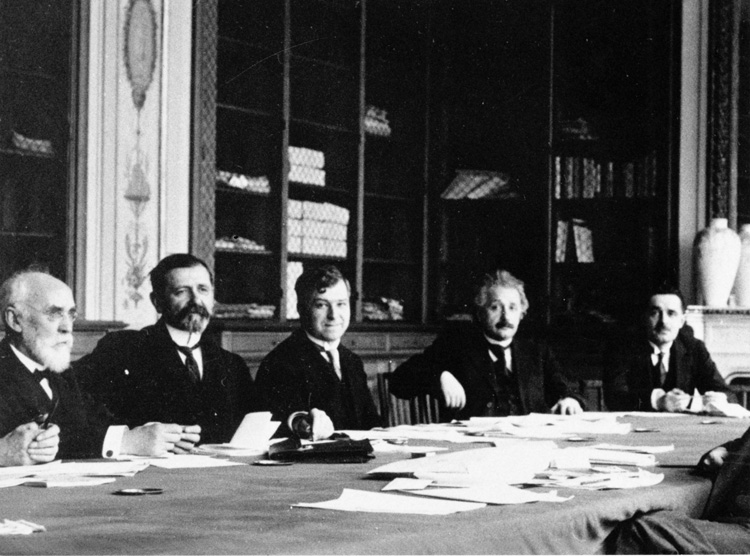 The ICIC was finally set up in 1922 as an advisory organ of the Assembly and the Council; it released its first report that same year. The Committee directed the work on intellectual cooperation, was in charge of promoting intellectual work and international relationships between scientists, researchers, teachers, artists and members of intellectual professions, and improving working conditions of intellectual workers, in order to promote international understanding between States as a means to preserve peace.

In particular, it worked on protection of scientific property, library questions, university and school matters, education, youth questions, the future of culture, international collaboration in arts and literature, protection of historical monuments, cooperation between museums and libraries, copyright, etc.

Taking into account the composition of the Committee by such distinguished people as Henri Bergson, Albert Einstein, Marie Curie, and Paul Valery, the intellectual contacts which it helped to restore after the war, and the mutual understanding and goodwill it symbolized, it became apparent that the International Committee on Intellectual Cooperation in itself represented an act of "rapprochement" between nations. 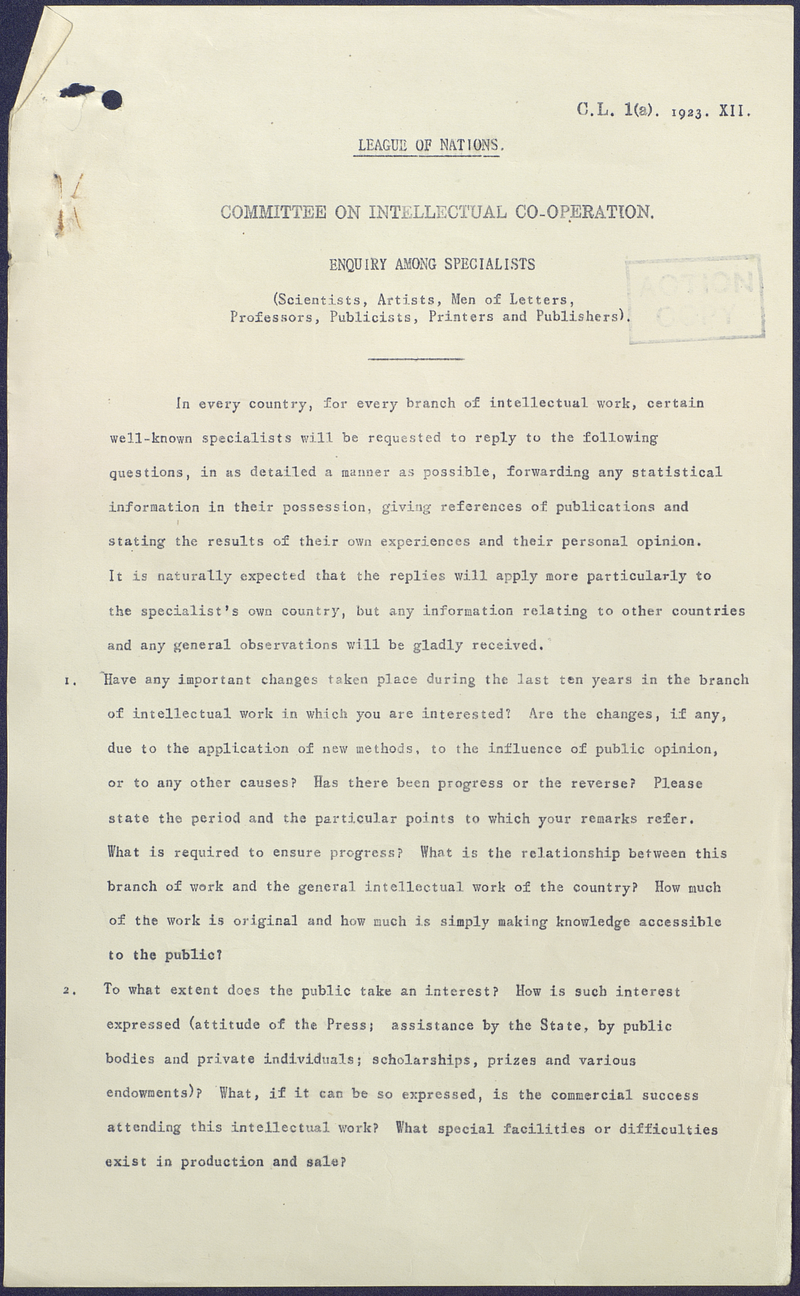 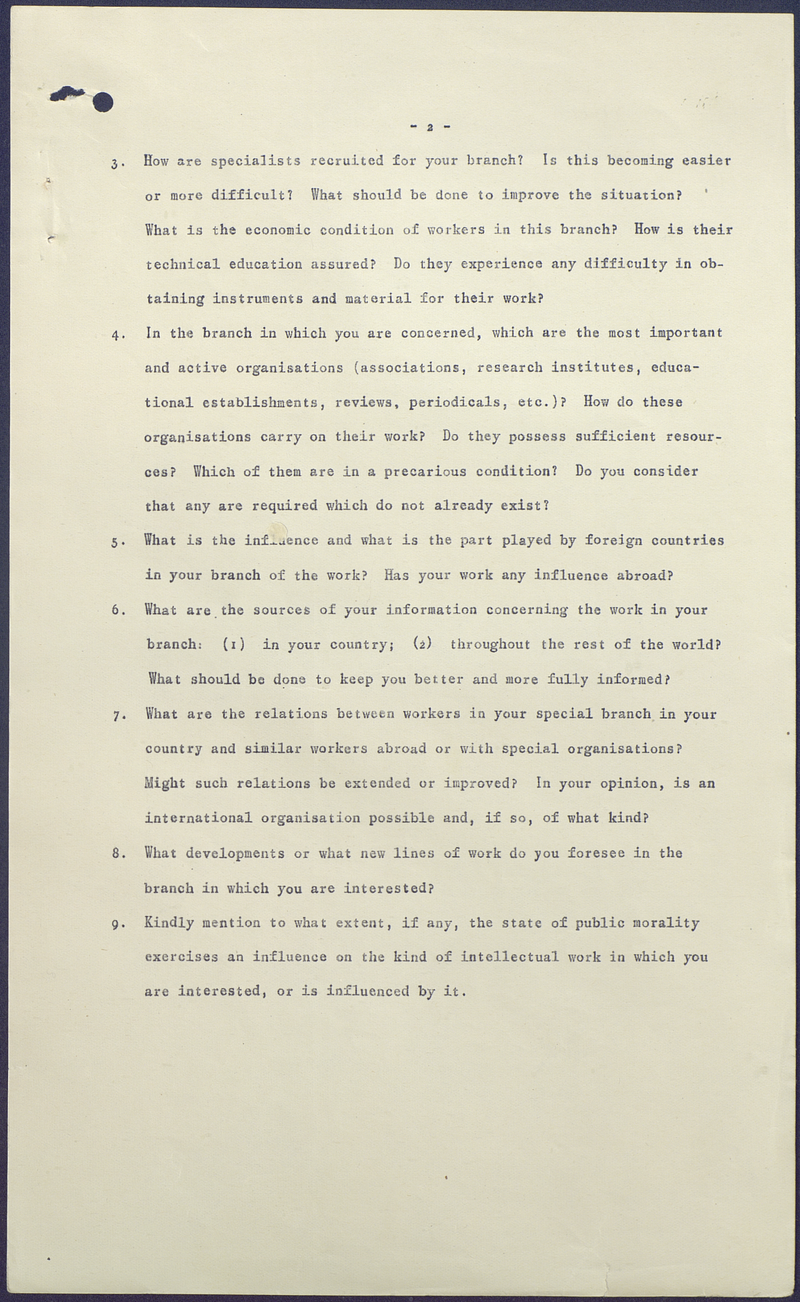 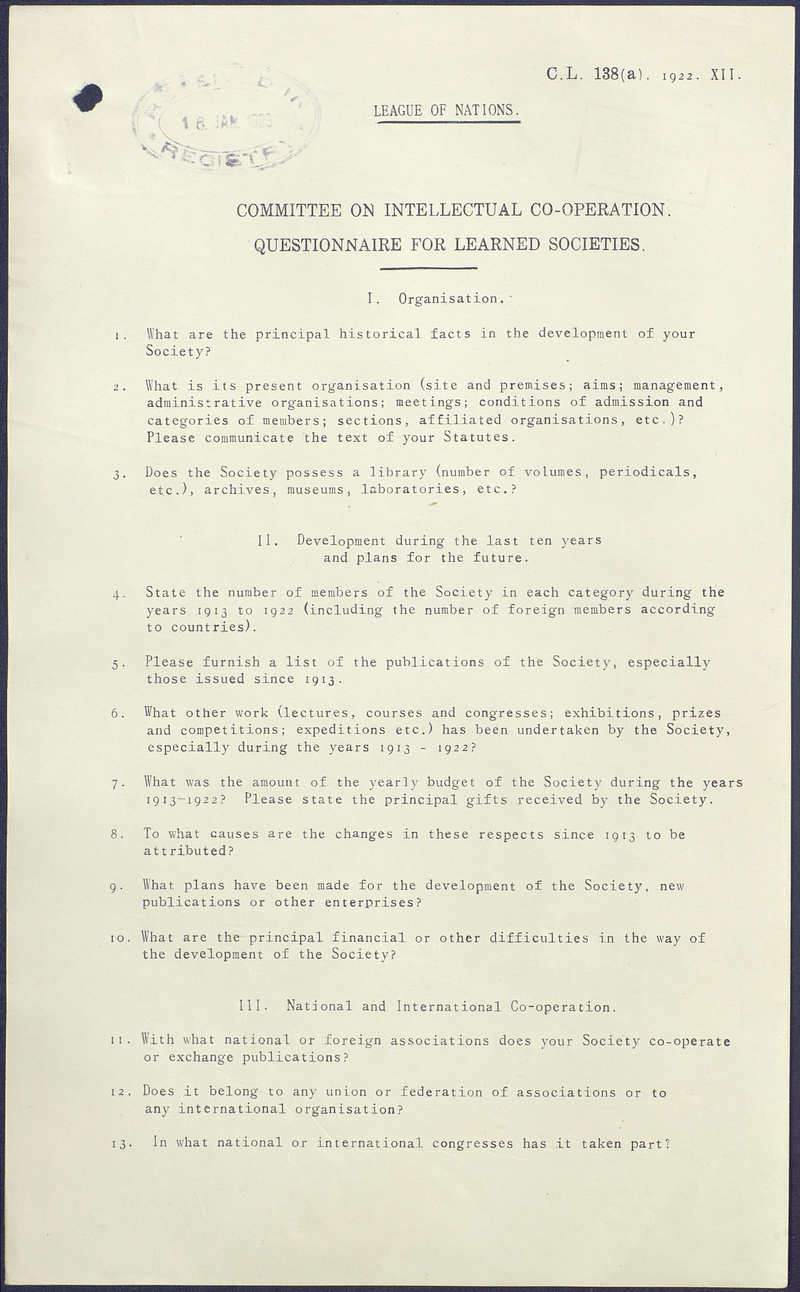 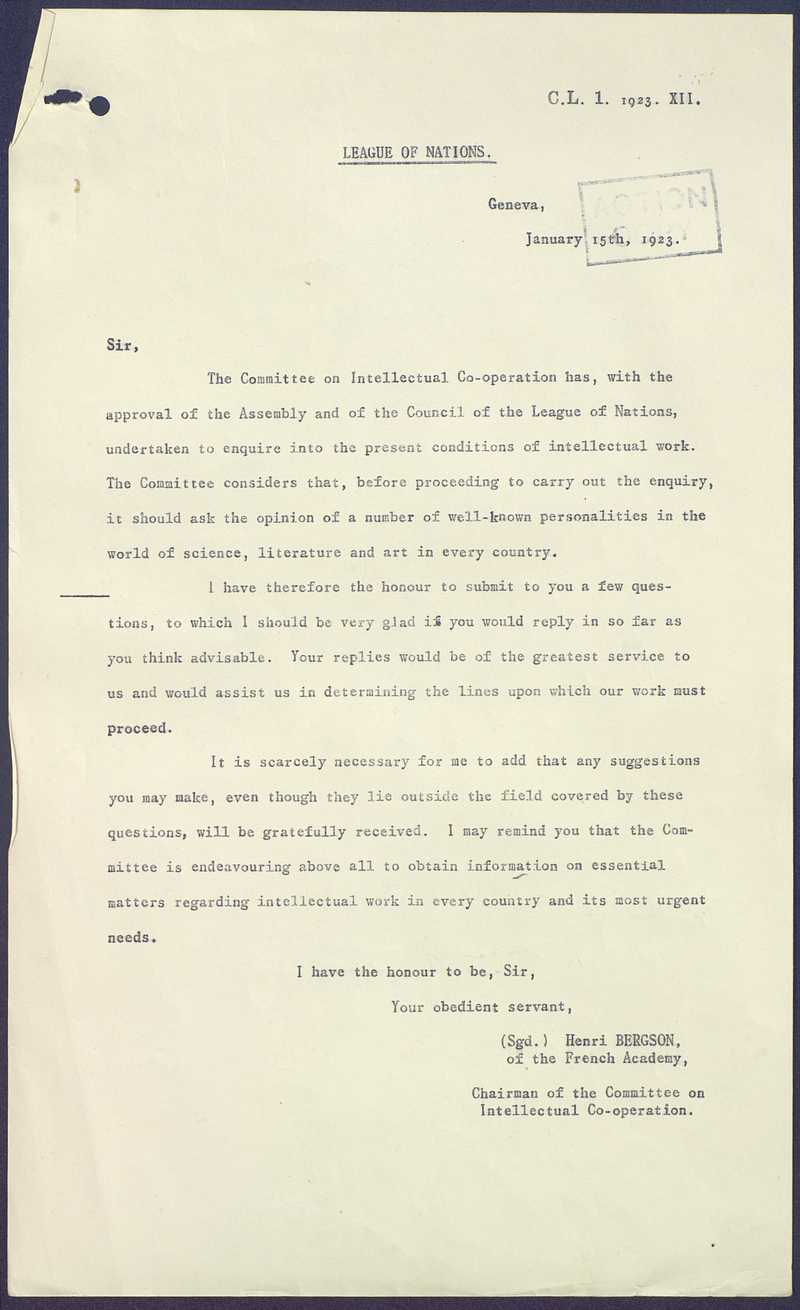